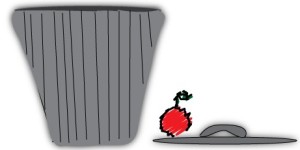 Sly Cooper is coming for your trash can.

I knew Sly Cooper 4 was coming to PS3. I could foresee it like a weather man predicting a bad storm. But I’d like to think that I’m one of the good weather men whose predictions are always right.

Anyway, to prepare myself, I sat down and played through all three 3 games in the Sly Cooper Collection. I didn’t do it all at once and still had enough energy to write.

So I put fingers to keys and started typing my impressions of each game. Then I put together a wish list of features that I hope will appear in Sly Cooper: Thieves In Time (Sly 4).

Keep in mind that there are spoilers ahead.

I’ll start with the bad news. Then you’ll get the news and instantly cheer up.

I hated how the one hit kills in Sly Cooper sometimes felt cheap. For example, I landed on a plant or cacti, by accident, and somehow died. However, the one hit kills worked during boss fights, making these fights more challenging and entertaining.

The looping “music” got on my nerves.

Bosses were excellent, though some were better than others. The vicious voodoo boss fight, where you tap buttons that appear on-screen to dodge a boss’ attacks, is fantastic.

I found the fight against the Panda boss less interesting because I could easily avoid his attacks. Beating the more challenging bosses gave me a sense of accomplishment. Trophies also helped reinforce that accomplishment.

Sucker Punch, the developer, created beautiful artwork to introduce and close each episode of the game. This art looks like it belongs on a Saturday morning cartoon show. Of course, Sly and the gang are lovable characters and look great.

• Once Upon a Time

This game told a straightforward and interesting story about Sly retrieving the Thevius Racoonus.

Wow! This time the good stuff was truly excellent.

Sly 2 had a lot of gameplay variety because of all the different mini games. You also get to play as Bentley and Murray, which was a lot fun, and made for interesting missions where all three members worked together. The team work in this game, for me, really makes Sly 1 original. I mean, come on, where else can you have a turtle, pink hippo, and raccoon work together on a heist?

The artwork was still beautiful.

Could Use Some Work Stuff:

I thought the game was a little too long. Why is that a problem? Quality is more important than quantity or game length. Sucker Punch could have removed some boring missions and mini games. For example, in one mission, Bentley had to slowly carry an eagle egg while avoiding the swooping Eagles above.

Sometimes, I lost track of the story in this game because it was so long. That’s not a huge problem because story is less important than having fun. Overall, though, I preferred the clear story and length of Sly 1.

I wonder if the developers thought their game was too long. After all, they wrote in their end credits, “OK. THAT’S IT. YOU’VE SEEN EVERYTHING. YOU WON. GO OUTSIDE.”

I had the most fun playing as Sly, Murray and Bentley, especially when all three completed a job together. It was really creative and fun when I got to play as all three characters in a bar brawl.

I had more fun playing as Sly, Bentley and Murray than the recruits, like Penelope. Penelope’s helicopter mission in China was annoying because I couldn’t find bad guys under the roofs.

I would remove some recruits, like the Panda King and Guru, and give the remaining ones new, fun powers. Then I’ll be excited to play as the recruits and still get my Sly, Bentley and Murray fix.

• The Last One Was Just Right

I think Sly 3 was the right length. It wasn’t too short or too long, and I could keep track of the story. I particularly liked the prologue, which gives players a taste of the game’s final boss battle. Competitive multiplayer is in Sly 3, but I don’t know anyone who would play it, and I don’t think it’s necessary.

Sly 2’s ending was somewhat anti-climactic for me. I wasn’t on the edge of my seat when I entered into an easy on-rails shooting sequence against Clock-la. Sly 3’s ending, however, was much more suspenseful and fun. First, I had to complete a large obstacle-course and then fight a towering boss.

Could Use Some Work Stuff:

• Challenges that Mean Something

• You Can’t Beat BioWare at Their Game

Here’s what I’d like to see in Sly 4. This wish list is for the developer Sanzaru Games.

2. Keep and Improve the Challenges

Keep the challenges from Sly 3, but reward players for completing them. Players should unlock new coins and abilities for beating challenges.

Make a co-op mode but remove competitive multiplayer. I think it would be cool to play two player co-op as Sly and Carmelita. Or it could be fun to have three player co-op with Sly, Bentley and Murray.

It’s not hard to imagine this kind of mode appearing in Sly 4. After all, in Sly 3, one player could take turns controlling Sly, Murray and Bentley in a bar brawl. Why not let three players control these characters, in a similar situation, in online or split screen co-op?

Boss battles should end with a torrential downpour of coins falling on the player. That way they can buy new abilities to prepare for upcoming battles.

5. Keep the paraglider and the flying wheelchair

The paraglider and wheelchair were helpful because I could fly over enemies and avoid fights. Also, it was just plain cool to see a turtle flying around in a wheelchair. I mean, what more could you want?

I liked how each Sly game had several episodes. Each episode had a hub world where players completed jobs and fought henchmen. Please, Sanzaru, don’t make the hub worlds too large or change this formula. Instead, spend more time making creative and fun mini games and setting them in beautiful hub worlds.

Make the recruits, like Penelope, more fun to play. Give them more abilities and give players more time to play as them.

I just read that Sly 4 will allow players to meet Sly’s ancestors. This is a fantastic idea that I was going to suggest. No, really, I swear that it was on the tip of my tongue. I guess great minds think alike.

9. Have you ever Met a Talkative Raccoon?

Remove any conversation system or competitive multiplayer. You should just add co-op instead.

Give us a great final boss battle, like in Sly 3.

Add another obstacle course toward the end of the game.

What do you want to see in Sly Cooper: Thieves in Time (Sly 4)?

One response to “Sly Cooper 4 PS3: My Wish List”